In this article we would assume that you have the latest installation/setup of :

Since I am using Windows, below is how the environment variables are configured on my system:

The EAP/AS packaged JConsole lets us use all the features of the JDK provided JConsole and in addition you will be provided the JBoss CLI (Command Line Interface) as the last tab of the console to manipulate the runtime settings of the server. So, follow the instructions below to be access the JBoss CLI as well thru JConsole.

===Note === For this to work correctly ensure the following:

The simplest way to get into the guts of the JBoss server's MBeanServer is to select the Local Process in the New Connection window and double-click on the line item that starts with jboss-modules. You would go for this option if you are logged on the machine running the standalone server


Remote Process Connection - The Other Way

The other way to to provide a URL for the remote process of the form: service:jmx:remoting-jmx://{host_name}:{port}.

You would choose this option if the server was started on a remote machine such that the management port binds to the remote IP (that is pingable from the machine where you are running JConsole from).

You may use the command : telnet IP PORT to verify reachability from the host running JConsole .

In the example below the management port of the remote server is bound to the IP address: 192.168.1.20

The following image displays such a usage: 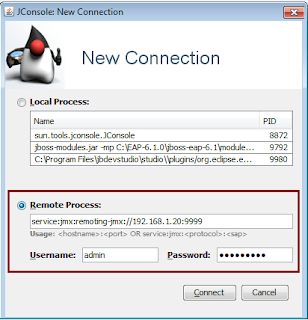 The behavior of directly using jconsole.exe provided by Oracle JDK, is very similar to its working described above when used with wrapper jconsole.bat.

Since we are not adding additional JBoss specific JARs to the classpath before launching it:

The behavior of Oracle's jvisualvm is similar to jconsole's when used directly and without adding the jars required by the remoting-jmx to the classpath. That is:

If however, there is an existing JBoss EAP/AS installation we could leverage it and make JMX connections :

Follow the steps listed below to be able to execute jvisualvm.exe and use the remoting-jmx functionality supported by JBoss to connect remotely:

Posted by Vijay Bhaskar Chintalapati at 7:41 AM